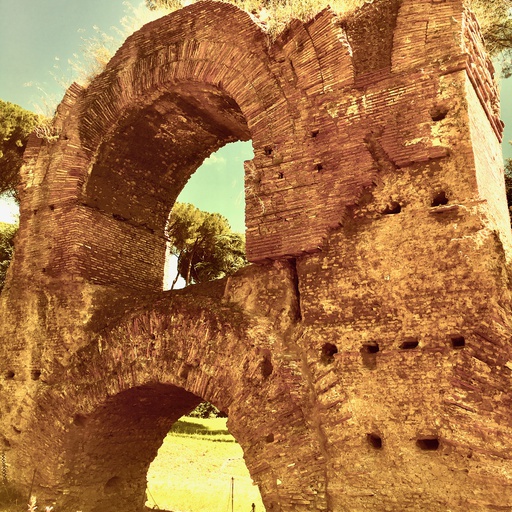 
At first sight they are only two overlapping arches. But it's actually one of the best places to eat a sandwich in Rome. In history it is something more: it is the fragment of the Claudian Aqueduct on the Palatine Hill: the arrival point of a 68 km building that brought 2200 liters of water per second to the citizen of Rome.

This story is told by Sesto Giulio Frontino, who in the first century was the superintendent of the aqueducts of Rome (curator aquarum) of the Emperor Nerva.

Frontino was very proud of Roman hydraulic engineering. So proud that in his treatise on aqueducts he writes:

Tot aquarum tam multis necessariis molibus pyramidas videlicet otiosas compares aut cetera inertia sed fama celebrata opera Graecorum. (With such an array of indispensable structures carrying so many waters, compare, if you will, the idle Pyramids or the useless, though famous, works of the Greeks.)

Frontino's pride came from a meticulous and continuous work of measuring and checking the correct functioning of each fragment of the 68 km of the building.

Eating a sandwich in the Roman Forum, in front of what remains of the Claudius aqueduct, one can therefore reflect on the global water crisis and the attention that we must pay to water management.

The Roman technological model, and mainly the water management model, is certainly an example to be studied carefully if we want to live in a world with a distribution of the waters of which to be proud.