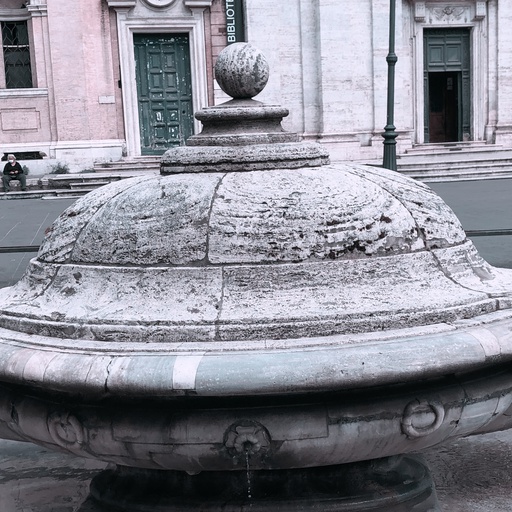 Fountain of the Terrina


The fountain of the Terrina belongs to the numerous group of fountains dismantled and rebuilt; in fact, it was originally located in the center of Campo de 'Fiori

The project is the work of Giacomo della Porta (1533-1602) who conceived a fountain consisting of an oval-shaped marble basin, placed in the center of a low basin recessed with respect to the floor level due to the low pressure of the Virgin water on the square .

The fountain, built between 1590 and 1595, has subsequently undergone some significant changes; in fact, placed in the center of the ancient and very crowded market, it was always cluttered with merchandise and waste, so that in 1622, a huge travertine "lid" was superimposed on the tub which bears the motto engraved on the collar: "Love god and do not fail, it is good and lax to say. MDCXXII ". From that moment the work earned the popular name of "Terrina".

In 1889 the fountain was dismantled to make room for the monument to Giordano Bruno in the center of the square.

In 1924 it was rebuilt in front of the New Church, along the axis of Corso Vittorio Emanuele II opened as part of the urban interventions carried out for Rome as the capital. The tank with its lid was placed at a lower level than the floor, in the center of a quadrangular basin. The reservoir was originally accessible via four small ramps; the enlargement of the ramps placed on the short sides is due to the arrangement of the square built in 1998.

The restoration of 1999-2000 highlighted the heterogeneity of the marble used for the tub, partly original and partly replaced during the reassembly.