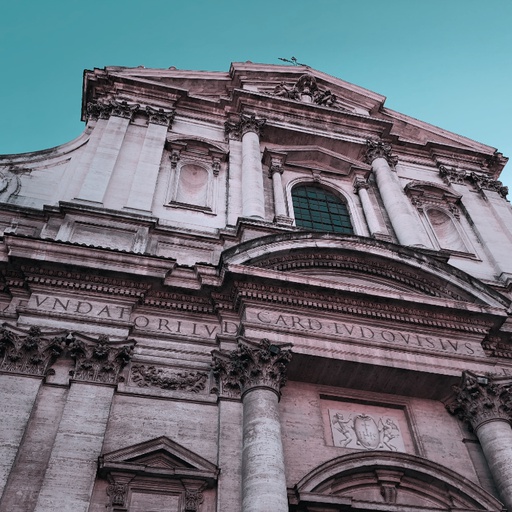 Church of St. Ignatius of Loyola at Campus Martius


The Church of St. Ignatius of Loyola at Campus Martius (Italian: Chiesa di Sant'Ignazio di Loyola in Campo Marzio, Latin: Ecclesia Sancti Ignatii a Loyola in Campo Martio) is a Roman Catholic titular church, of deaconry rank, dedicated to Ignatius of Loyola, the founder of the Society of Jesus, located in Rome, Italy. Built in Baroque style between 1626 and 1650, the church functioned originally as the chapel of the adjacent Roman College, that moved in 1584 to a new larger building and was renamed the Pontifical Gregorian University.

The Collegio Romano opened very humbly in 1551, with an inscription over the door summing up its simple purpose: "School of Grammar, Humanity, and Christian Doctrine. Free".[2] Plagued by financial problems in the early years,[3] the Collegio Romano had various provisional centres. In 1560, Vittoria della Tolfa,[4] Marchesa della Valle, donated her family isola, an entire city block and its existing buildings, to the Society of Jesus in memory of her late husband the Marchese della Guardia Camillo Orsini, founding the Collegio Romano.[3] She had previously intended to donate it to the Poor Clares for the founding of a monastery.[5] The nuns had already started to build what had been intended to become the Church of Santa Maria della Nunziata,[6] erected on the spot where the Temple of Isis had stood.[7][1]

Although the Jesuits got the marchesa's land, they did not get any money from her for completing the church. Budgetary constraints compelled them to hire their own architect. Construction of the church was taken over by the Jesuit architect Giovanni Tristano. Built entirely by Jesuit labour, the Church of the Annunciation was first used for worship in 1567. A three-aisled church dedicated to the Most Holy Annunciation (Italian: Santissima Annunziata) was built by the Collegio Romano between 1562 and 1567 on the foundations of the pre-existing construction. Since the earlier church had already been built to the height of the ground floor in 1555, there was no way for the Jesuits to expand the structure to hold the increasing number of students attending the Collegio Romano. The facade was very similar to that of the contemporary Church of Sant'Andrea al Quirinale, which was also designed by Giovanni Tristano. In accordance with the wishes of the marchesa, the façade proudly displayed the Orsini arms. The Church of the Annunciation was enlarged in 1580 when Pope Gregory XIII expanded the Collegio Romano itself, especially the side chapels.

The old church became insufficient for over 2,000 students of many nations who were attending the College at the beginning of the 17th century.[1] Pope Gregory XV, who was an old pupil of the Collegio Romano, was strongly attached to the church. Following the canonization of Ignatius of Loyola in 1622, he suggested to his nephew, Cardinal Ludovico Ludovisi, that a new church dedicated to the founder of the Jesuits should be erected at the college itself. The young cardinal accepted the idea, asked several architects to draw plans, among them Carlo Maderno. Ludovisi finally chose the plans drawn up by the Jesuit mathematician, Orazio Grassi, professor at the Collegio Romano itself.

The foundation stone was laid only on August 2, 1626, four years later, a delay which was caused by the fact that a section of the buildings belonging to the Roman College had to be dismantled. The old church was eventually demolished in 1650 to make way for the massive Church of St. Ignatius of Loyola, which was begun in 1626 and finished only at the end of the century. In striking contrast to the Church of the Annunciation, which occupied only a small section of the Collegio Romano, the Church of St. Ignatius of Loyola took up a quarter of the entire block when it was completed.

The church was opened for public worship only in 1650, at the occasion of the Jubilee of 1650. The final solemn consecration of the church was celebrated only in 1722 by Cardinal Antonfelice Zondadari. The church's entrance now faces on to the Rococo Place of San Ignazio was planned by the architect Filippo Raguzzini.