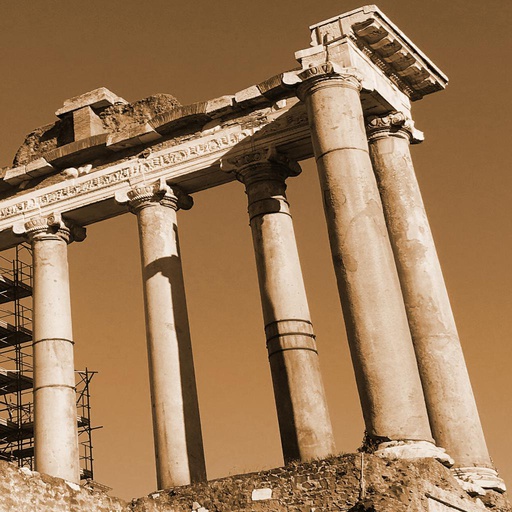 
Standing at the foot of the Capitoline Hill, alongside the ancient road ascending towards its peak - known as the Clivus Capitolinus - along a stretch of the Vicus Jugarius and near the ancient shrine of Ara Saturni: these are the initial spatial coordinates of the Temple, one of the oldest buildings erected in the Roman Forum.

Built in honour of the god of agriculture and wealth, Saturn, which the Romans identified with the Greek god Kronos, who fled Greece to settle in the Roman land and became, as the legend has it, the symbol of a golden age, the aura aetas of abundance, free of conflicts and social inequalities. The festival celebrated by the Saturnali, the Saturn followers, can also justify the choice to house here the public treasury, as stated by Macrobius and Tacitus. In fact, the Temple of Saturn, since its consecration in the Republican age, has housed the Aerarium Populi Romani for its location, "at a secure site, fortified on each side, a very safe place to keep the state public treasure" and also "for the opinion that the Romans had in the time of that god, in the century they called joyful, (in which) theft had not yet been found, nor known; believing therefore that under his protection it should be safe and well watched".

The Treasury retained proceeds of taxes, sales of public goods, war allowances, public contracts, the financial accounts of magistrates, census registers, the texts of laws and senate consultations, protocols of elections and oaths of magistrates. It houses the State Treasury and the Archive consisting of not only financial documents, whose history is intertwined with that of the Tabularium; it also preserves the military insignia and, at least until the end of the republican era, the official scale for weighing not coined metal. In charge of managing the Treasury and the Archive in the Republican period were two public officials, the Questors, who were magistrates under the supervision and control of the Senate.

However, subsequent changes in the administration of the Aerarium Saturni point out a disruption with the Republican system established by Octavian, who introduced the Prefects in 28 BC and, a few years later, the Praetors of the Aerarium. These changes also refer to the way taxation was organized at the time of Emperor Claudius, who reintroduced the Questors appointed this time by the Prince. They show also the increasing role that the latter assumed in the management of the Treasury and the changes made gradually in the financial administration and the services, including the Archive, until the Neronian reform of 56 AD, which provided the two Aerarium Praetors with a long-term position.

The importance of the treasury itself changed over time with respect to the imperial treasury, where more and more revenue converged, up to the point where the Aerarium Saturni shrank, in the third century AD, at the municipal treasury of the city of Rome. Nothing seems to have remained today of the early period temple, the original building that marks significantly, in the time between its creation and its consecration, the transition from the monarchical period to the Republican era. Ancient sources place the dedication, also known as the inauguration, of the Aedes Saturni in the period between 501 and 493 BC, allowing to assume that its construction began towards the end of the Etruscan dynasty of the Tarquins. What remains today belongs to two clearly distinct chronological intervals, but quite distant from one another.

The high podium is preserved on three sides. Made out of Roman concrete (opus caementicium) it was covered with blocks of travertine in opus quadratum and used to display public documents, as shown by the holes spread over the surface. On this imposing base from which, according to some reconstructions, it was possible to access the rooms of the Treasury, rested the temple which was probably prostyle, accessible by a staircase placed along the façade. Its renovation, which started in 42 BC by Lucius Munatius Plancus, makes part of that ancient tradition according to which triumphant military commanders (viri thriumpales) used to build ex-novo or to restore public buildings using the loot accumulated during military campaigns.

In the specific case it is the victories ex Raetis and ex Gallia of Munatius Plancus who, at the beginning of 42 BC, assumed the consulship with Lepidus. The conclusion of restructuring works following the victory of Octavian against Antonius at Actium, in 31 BC, consents to link this building back to the overall renewal program of the Roman Forum promoted by the new Princeps. It also allows to associate the works on the Temple of Saturn to the reform of Augustus regarding the administration of the Treasury, in the transition from the Republican age to the imperial period. Moreover, the testimony of Macrobius, concerning the presence of tritons as acroteria " an iconographic theme to celebrate Octavian's naval victories, especially the one in Actium " on the temple pediment (tritona cum bucinis fastigio Saturni Aedis superpostos), shows the introduction of specific elements used for an official propaganda led by imageries.

The eight columns of the pronaos with four-sided Ionic capitals, the lintel and what remains of the pediment belong, however, to another moment in the history of this building, to a new construction built in the fourth century AD after a fire as shown by the inscription on the external frieze of the architrave. Several elements - cornices, decorations, bases, components of the trabeation - coming from different places show the reuse of building materials or, in other words, narrate a story and a practice made of abandonment and reuse, of stratifications and re-features, in which space and time are intertwined.