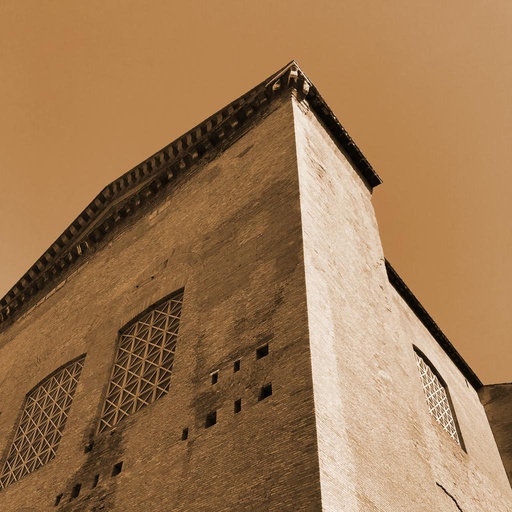 
The Curia Julia was the seat of the Senate conceived by Julius Caesar as part of a general project to restore the ancient Roman Forum, expand its monumental, administrative and religious functions and dedicate it to himself. Before then, according to the tradition of Romulus, the Senate, a major political institution of ancient Rome, met in what was called the Curia Hostilia, allegedly founded by the third king of Rome, Tullus Hostilius.

Built in the northwest corner of the Forum, close to the open space of the Comitium, where assemblies of the people were originally held, the Curia Hostilia, a place sacred to the augurs, was set on the four cardinal points, with its major axis disposed north-south. The complex of the building, the Comitium and the Rostra was the centre of political life and public decisions, especially in the early days of the Republic of Rome.

Different circumstances, such as the growth of Rome, her population and dominions, and more complex administration, changed the representative function and the role of this part of the Forum in the course of time. The histories of the buildings and spaces of power were also interwoven more than others with political affairs and changes. Lucius Cornelius Sulla Felix rebuilt the Curia Hostilia, without changing its name. Expansion began in 81 BC when the number of senators rose from 300 to 600. The previous orientation of the building was maintained, but part of the Comitium was occupied, becoming a sort of vestibule to the Curia. Certain historical features of the space disappeared, such as the statues of Pythagoras and Alcibiades, and relics of archaic Rome. By the late republican period, certain public functions had already been transferred elsewhere in the Forum, the Comitium began to be emptied and the Senate was meeting for example in the Temple of Castor and Pollux. The Curia Hostilia was destroyed by fire in 52 BC during turmoil associated with the funeral of Publius Clodius Pulcher, and was rebuilt by Faustus Cornelius Sulla. Julius Caesar subsequently made radical changes. The Curia Cornelia, as it was then called, was demolished after partial inauguration of the Forum of Caesar in 46 BC. Two years later, the Temple of the goddess Felicitas was inaugurated and presumably demolished not long afterwards. In the same year, work on the new Curia Julia began. It was bigger, because Caesar increased the number of senators to 900, and it occupied a different site. The new Curia became a sort of addition to the Forum of Caesar, aligned with it, the back entrance probably opening directly onto the portico of the Forum itself. The disappearance of the Comitium, demolition of monuments such as the Graecostasis and the Rostra, the latter rebuilt in a different context with a new meaning, suggest that Julius Caesar was not only redesigning the space and removing old republican symbols, but also replacing the name of Sulla in the Forum with his own. His assassination on the Ides of March, 44 BC, meant that the new Curia, like other work programmed by Caesar, was completed by his adopted son and successor Octavian. It was inaugurated in 29 BC together with the Temple of Caesar, both of which celebrated the power and victory of Octavian in Illyria, Egypt and Actium. According to a coin of the period, the vertex of the facade of the Curia carried a winged victory and globe, and the lateral acroteria were decorated with statues of gods bearing the anchor and the oar, linked to the victory at Actium, the founding event of the new imperial order. Inside the Curia, Octavian placed the statue of Victory from Tarentum and displayed an honorary shield. The Curia Julia was imposing. It had a single-gabled roof and triangular pediments on the two minor sides. The main facade had a central door with three large windows above it. There may have been a portico, but the Curia in the Forum today is not the building of Caesar and Augustus, which was destroyed by fire in 283 AD and rebuilt by Diocletian largely on the previous design.[, but with special emphasis on the corners? reinforcing the angles?] In 630 AD, Pope Honorius transformed the Curia into a church and Pope Adrian dedicated it to his protector, naming it Church of St. Adrian in the Forum, or in tribus foris, at the intersection of three fora. Subsequent changes were related to the different function of the building until last century, when work completed in 1936 brought to light the structure of the third century (AD) Curia. In the vast internal hall (21 m high, 18 m wide and 27 m long) the wide low steps that held the seats of the senators are still visible today to the left and right, as well as the central basement for the presidency at the end.