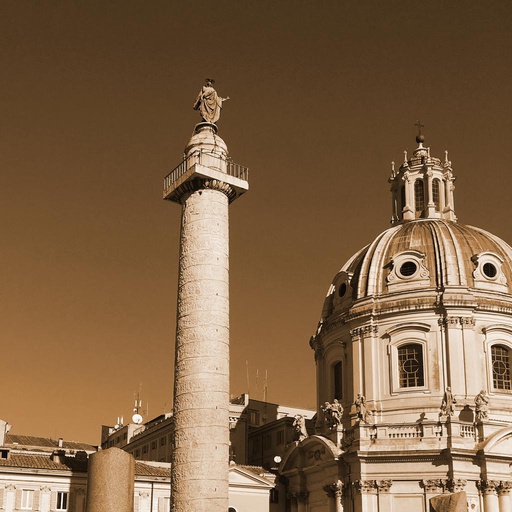 
Trajan's Column (Italian: Colonna Traiana, Latin: Columna Traiani) is a Roman triumphal column in Rome, Italy, that commemorates Roman emperor Trajan's victory in the Dacian Wars. It was probably constructed under the supervision of the architect Apollodorus of Damascus at the order of the Roman Senate. It is located in Trajan's Forum, north of the Roman Forum. Completed in AD 113, the freestanding column is most famous for its spiral bas relief, which depicts the wars between the Romans and Dacians (101–102 and 105–106). Its design has inspired numerous victory columns, both ancient and modern.

Ancient coins indicate preliminary plans to top the column with a statue of a bird, probably an eagle.[4] After construction, a statue of Trajan was put in place; this disappeared in the Middle Ages. On December 4, 1587, the top was crowned with a bronze figure of Saint Peter the Apostle by Pope Sixtus V, which remains to this day.

Trajan's Column was originally flanked by two sections of the Ulpian Library, a Greek chamber and a Latin chamber, which faced each other and had walls lined with niches and wooden bookcases for scrolls. The Latin chamber likely contained Trajan's commentary on the Roman-Dacian Wars, the Dacica, which most scholars agree was intended to be echoed in the spiralling, sculpted narrative design of Trajan's Column.