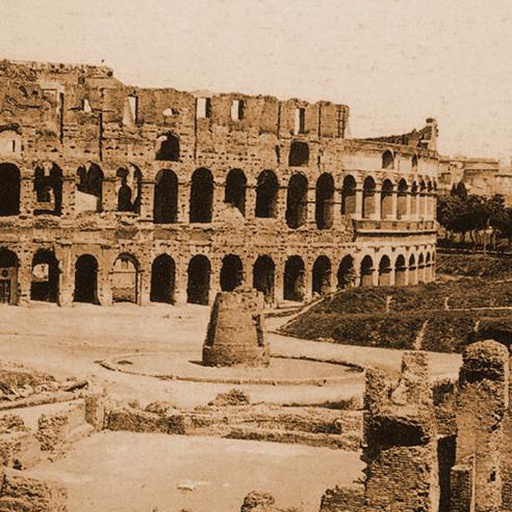 
The remains of what is known as the Meta Sudans, a monumental fountain built in the Flavian period, stand near the Arch of Constantine. The fountain was in use until the 5th century CE, when the canals that drained the water from the Valley of the Colosseum began to become silted up. Its ruins were then demolished in the Fascist period to build Via dei Trionfi.

Thanks to depictions of the fountain on coins, photos from the late 19th century and drawings made when it was about to be demolished, it is possible to reconstruct its original appearance: a cylindrical base, faced with marble and perhaps articulated in niches, with a conical upper element surmounted by a flower or sphere.

The name “meta” derives from its conical shape, which recalled the turning posts in the circus, while “sudans” (“sweating”) referred to the water welling up from it.

The Meta Sudans occupied a site of great urban importance, at one of the vertices of the sacred boundary of the Romulean city, at the intersection of two roads associated with the route of triumphal processions and the meeting point of four of the districts of Augustan Rome. In the same area Augustus had already erected a smaller fountain, recorded in the sources and discovered during recent archaeological excavations. The Flavians thus perpetuated the memory of a strongly symbolic monument.