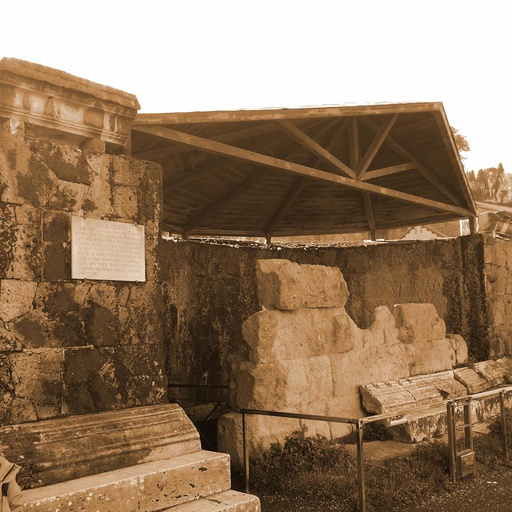 
"They brought Caesar's body to the Forum near the ancient Regia of the Romans and they made a pile of boards, chairs and any other available timber (...) they lit the fire and the people watched it burn throughout the night. First an altar was built on the spot; later the Temple of Caesar where he is worshiped as a god."

As told by Appian, the Temple of Caesar was built on the site where his body was cremated: in the eastern part of the Forum near the Regia, which was his official residence as pontifex maximus. Ancient sources give different accounts of the public funeral of the dictator and of Mark Antony's speech, but they agree on the fact that the people in tumult took possession of the body and improvised a funeral pyre. A column of Numidian marble dedicated to the Father of the Homeland (Parenti Patriae) was then erected on the site, next to an altar, and this became the popular place of worship even after consul Dolabella ordered its removal.

Suetonius writes about the first rites to Caesar, of "sacrifices, vows, and resolution of conflicts by swearing on the name of Caesar". He also observes that the deification was "not solely formal, but it was what the people believed". He mentions a comet that was visible in the skies of Rome for seven consecutive nights, interpreted as a symbol of Caesar's entry among the gods. To honour the deified Julius Caesar, the first ruler to be so proclaimed, the Senate decreed the construction of a temple in 42 BC. This was an initiative of the second triumvirate: Mark Antony, Lepidus and Octavian.

The temple was inaugurated in 29 BC during celebration of the triumphs of Octavian in Illyria, Egypt and Actium. The political meaning of the temple changed with time. On coming to power, Octavian needed to present himself as the legitimate successor of Caesar, as son of the god. But later, in the different scenario of the victory at Actium and bestowal of the title of Augustus in 27 BC, it became important to celebrate his victories. Thus the temple became one of the places where they were recorded, and was no longer dedicated solely to rites to Caesar, as shown by certain modifications.

The original temple " of which remain part of the base, fragments of marble decorations and the nucleus of the altar" rested on a high podium that enhanced its monumental character. Two flights of steps at the sides led up to the first level of the podium, and stairs between the columns led to the pronaos. The latter had six Corinthian columns on the facade, very closely spaced, as in the pycnostyle temple according to Vitruvius. According to some reconstructions, the third and fourth columns were spaced more widely, framing the temple entrance and beyond it the statue of Caesar in the cella, which was as wide as the temple itself.

On the short side of the podium, towards the Forum, there was a semi-circular niche containing an altar dedicated to the earthly Caesar, possibly the idea of Octavian in 42 BC, as shown by a series of coins minted around 36 BC when the temple was still under construction. The niche was closed by Octavian, probably when he returned from the East after defeating the Parthians in 19 BC. The wall built in the centre emphasised the linearity of the base which already displayed the rostra of ships defeated at Actium. The altar remained but became inaccessible.

"The persisting cult centred on the altar of Caesar had become an annoying problem for the Augustan government" (F. Coarelli), which wished to eliminate evidence of the civil war that followed the death of Caesar. The context of the temple changed. The monumental structure finished in marble was no longer alone at the centre of the short eastern side of the Forum. Alterations enhanced the presence of the Parthian Arch to its right, in some cases also the Actian Arch to its left. Alternatives for lateral access to the temple were proposed and for an internal or external speakers' tribune. Modifications highlighted links with the Regia behind the temple and explored spatial relations with the nearby Temple of Castor and Pollux and the basilicas on the long sides of the Forum. In any case, the Temple of Caesar underlined the role of the eastern side of the Forum, reserved for the family of the princeps and expressing the princeps-senatus diarchy through specularity with the western side of the Forum (F. Coarelli).