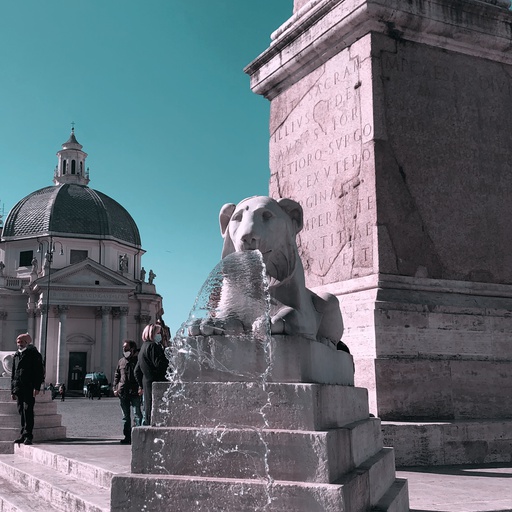 
The Flaminio Obelisk is one of the thirteen ancient obelisks in Rome, Italy. It is located in the Piazza del Popolo.

The Nineteenth Dynasty Pharaoh Sety I quarried this obelisk from granite quarries in Aswan. Before his death, artists inscribed one face of the obelisk, which Sety intended to erect in the Temple of Re in Heliopolis. Sety's son and successor Ramesses II completed its inscriptions and set it up in Heliopolis; it was brought to Rome in 10 BC by command of Augustus, together with the Obelisk of Montecitorio, and placed on the spina of the Circus Maximus, followed three centuries later by the Lateran Obelisk. Like most Egyptian obelisks, the Flaminio Obelisk was probably one of a pair, but no trace of its mate has ever been found. In Sety I's dedicatory inscription on one side of the shaft, the king boasts that he would "fill Heliopolis with obelisks."

The obelisk was discovered in 1587, broken into three pieces, together with the Lateran Obelisk; and it was erected in the Piazza del Popolo by Domenico Fontana in 1589, at the command of Pope Sixtus V. Sixtus had the Septizodium demolished to provide the travertine for the obelisk's pedestal, among other building projects.

In 1823, Giuseppe Valadier embellished it with a base having four circular basins and stone lions, imitating the Egyptian style.