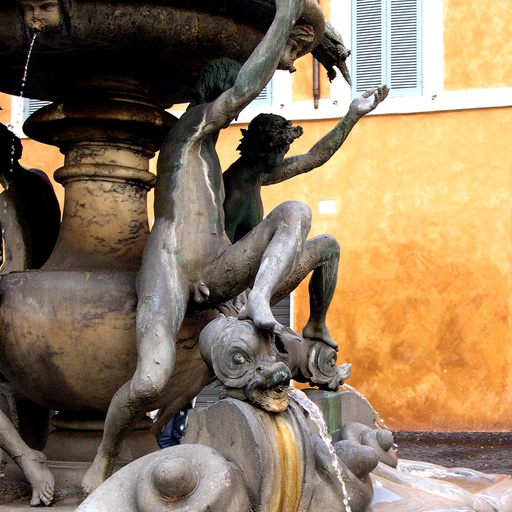 The fountain of the Turtles

The fountain of the Turtles is characterized by the prevalence of sculptural works on the complex and articulated architectural structure enriched by the precious polychromy of the marbles used.

The four bronze ephebes playing with as many dolphins, resting on the shell-shaped tubs, underline the mannerist refinement of the work which is absolutely distinct from the scheme adopted in the Roman fountains of the late sixteenth century.

Following the restoration of the ancient Vergine aqueduct, it was already decided in 1570 to install a fountain in the nearby Piazza Giudea; however the insistence of the noble Muzio Mattei had induced the Administration to move the fountain to the current square on which his private residence overlooked. The same nobleman, who undertook "to have the square bricked at his expense and to keep the source clean", must not have been extraneous to the choice, made during construction, to replace the bronze for the marble of the project in the realization of the sculptures.

The four turtles placed on the edge of the upper basin, attributed by tradition to GL Bernini, constitute a happy completion of the work carried out during the restoration of 1658-59, under the pontificate of Alexander VII (1655-1667), mentioned on the inscriptions of the four marble cartouches.

There are numerous restoration and cleaning interventions of the fountain testified over time; the last restoration was carried out in 2005-2006 following the installation of a new water treatment plant.