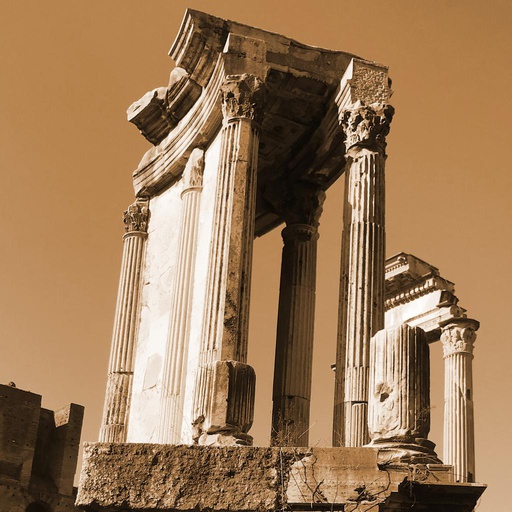 
The fulcrum of the monumental complex linked to the cult of Vesta is the temple dedicated to the goddess, a very ancient cult dating back to the second king of Rome Numa Pompilius, rebuilt several times due to the numerous fires and finally restored, in the forms still visible today, by Empress Julia Domna towards the end of the second century AD. From the circular podium in Roman concrete covered in marble, columns with Corinthian capitals rose. The interior housed the brazier with the sacred fire, which was never to be extinguished, a symbol of the eternity of Rome and its destiny as a universal empire. The circular shape was perhaps inspired by that of the huts of the archaic era, with a hole in the centre of the conical roof to let out the smoke. Inside the temple the Palladium was also preserved, a small simulacrum of Athena-Minerva, brought to Rome, according to legend, by Aeneas and symbol of the nobility of the Roman lineage.

Next to the temple is the house of the Vestal Virgins, priestesses dedicated to the cult of Vesta and to the surveillance of the sacred fire, the only female priesthood in Rome. Six in number, and coming from patrician families, they had to serve for 30 years, preserving their virginity, on pain of death. In return they enjoyed many privileges (they moved by cart in the city and had reserved seats in the shows). The entrance to the House, also known as Atrium Vestae, is flanked by a shrine with a high base and two Ionic columns, probably destined to house the statue of the Goddess. The building is centred on a courtyard, surrounded by a two-storey portico populated by statues, now exhibited in copy, of the chief Vestals who were placed at the head of the religious order. On the garden, characterized by three basins, opened the rooms arranged also on several floors, where among other rooms it is possible to recognize a mill and an oven. The upper floor, probably for private use, also included bathrooms and heating systems, and was overlooked by a further floor perhaps for the service staff. All the buildings, of republican foundation, were rebuilt and enlarged several times until Constantine (306-337 A.D.).