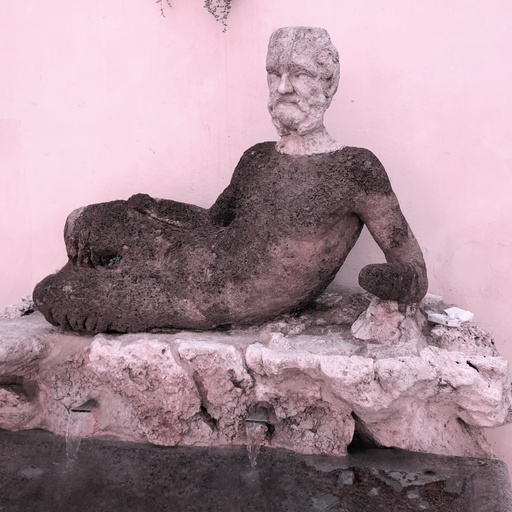 
The fountain of Babuino , so renamed by the Roman people that, due to its ugliness, it recognized the figure of a monkey in the statue, was originally a "semi-public" fountain. Built at the expense of a private individual, Alessandro Grandi from Ferrara, but intended for public use.

This denomination soon became so popular that it led to the change of the name of the street, opened by Pope Clement VII Medici (1523-1534), and called via Clementina in his honor . Built around 1576, the fountain consisted of a Roman era basin in gray granite - into which a simple cinnamon poured water - on which was placed a life-size statue in sculpted tuff depicting a Silenus lying on a cliff. Alessandro Grandi had it placed inside a niche on the main façade of his building.

The palace passed in the seventeenth century to the Boncompagni-Ludovisi family who in 1738 provided for its complete renovation. The fountain was then moved to the left (at number 49a) and inserted in a frame similar to the previous one, delimited by two pilasters and an architrave decorated by two travertine dolphins. In 1877, due to the works for the construction of the sewer system, the fountain was dismembered: the statue of Silenus was placed in the courtyard of Palazzo Boncompagni, while the basin replaced that of the trough in via Flaminia, in front of the Giulio fountain. III (1550-1555). Finally, in 1957, the Babuino was reassembled near the original site, but on the opposite side of the road, to the left of the church of Sant'Atanasio Greek gods.

The statue of Silenus (ancient, but with an irrelevant head) has also been identified with the Sabine god Sanco Fidio Semicapro. In popular tradition it became part of the group of "talking statues" (together with Pasquino, Marforio, Madama Lucrezia and Abate Luigi) which constituted the "congress of the witty", on which the anonymous complaints of the Romans were usually posted, known as pasquinades.