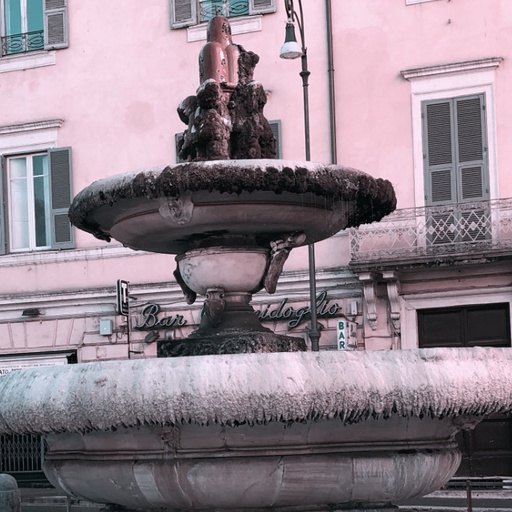 
The fountain in piazza dell'Ara Coeli, built in 1589, after the addition of the Acqua Felice, is located on a square not far from the Campidoglio, along the most important access road to the hill which, in those years, was undergoing a deep building renovation.

The design of the fountain is due to the architect of the Roman People Giacomo della Porta (1533-1602) who created yet another, very elegant variation on the theme of the late sixteenth-century fountain. The work - which the sculptors and stonecutters Andrea Brasca, Pietro Gucci, Pace Naldini collaborated with - appears as one of the most interesting creations of the Genoese architect.

Its structure is characterized by an elegant marble basin with an oval plant, decorated on the external surface by four masks; on this rises the upper basin supported by a baluster placed on a finely sculpted plinth. Two pairs of coats of arms, of the Roman people, and of the Chigi family, in memory of a restoration from the time of Alexander VII (1655-1667), are placed on the balustrade. The top of the basin is decorated with four cherubs supporting the amphorae. Originally the base of the fountain consisted of some steps that served as a support for the oval basin.

Some radical interventions of the nineteenth and twentieth centuries changed the appearance of the fountain: around 1860 the large circular basin was built at the base; subsequently, the demolition of the area at the foot of the Capitol transformed the urban fabric, leading to the demolition of the buildings on an entire side of the ancient square. Currently, therefore, the fountain suffers from a sacrificed urban position, at the point of convergence of two heavily trafficked streets.