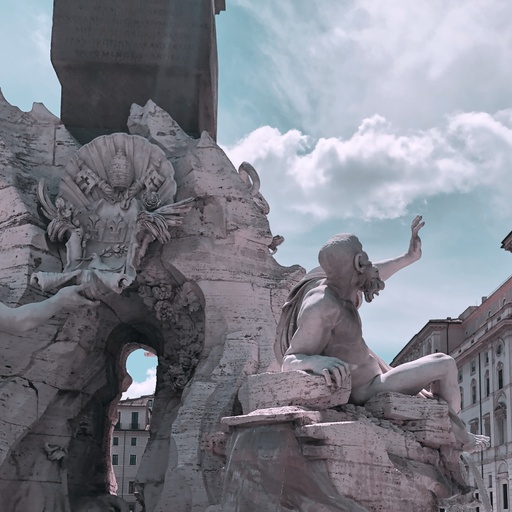 Fountain of the Four Rivers


The Fountain of the Four Rivers, designed and built by Gian Lorenzo Bernini (1598 - 1680), is an unsurpassed Baroque creation located in the center of one of the most important squares in the city.

Commissioned by Pope Innocent X Pamphilj (1644 - 1655) to adorn the square on which the family palace was being built in monumental forms in those years (together with the nearby church of S.Agnese and the Collegio Innocenziano), it replaced the installed drinking trough together with the two side fountains in the 1770s.
In 1647 the pontiff entrusted Francesco Borromini (1599 - 1667) with the project of the new pipeline that was to bring 180 ounces of virgin water to Piazza Navona and, at the same time, he decided to transfer the obelisk (Roman copy from the Domitian era) to the square. lay in pieces in the area of ​​the circus of Maxentius on the ancient Appian way.
After the completion of a competition of ideas in which important artists of the time participated, the pope entrusted the task for the realization of the work to Gian Lorenzo Bernini, who had presented a silver model of the new fountain
At the center of a low elliptical basin, the fountain is imagined as a large travertine cliff, carved out of a cave with four openings, which supports the granite obelisk. On the corners of the cliff are placed the monumental marble statues of the four rivers representing the continents then known, also identified by the vegetation and the animals sculpted alongside: the Danube by Antonio Ercole Raggi for Europe, with the horse; Claude Poussin's Ganges for Asia, with the oar and the dragon; the Nile by Giacomo Antonio Fancelli for Africa, with the veiled head (allusion to unknown springs) associated with the lion and the palm; the Rio della Plata by Francesco Baratta for America with one arm raised - perhaps to shelter from the rays of the sun represented by the obelisk - and next to it an armadillo.
On the upper part of the cliff are two large marble coats of arms of the pope's family with the dove carrying an olive branch in its beak, and the same dove, in bronze, is placed at the top of the obelisk.
The fountain was built between 1648 and 1651 by a large group of artists and workers directed by Gian Lorenzo Bernini.
Masterful fusion of architecture and sculpture, the fountain of the Four Rivers expresses movement in every sculptural detail, from the vegetation, to the statues, to the fauna represented in the basin and on the cliff, becoming the fulcrum of the entire surrounding space.