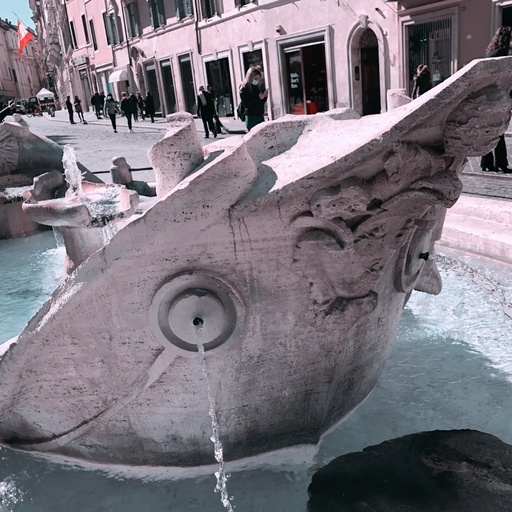 Fountain of the Boat


The Fontana della Barcaccia is a Baroque-style fountain found at the foot of the Spanish Steps in Rome's Piazza di Spagna. Pope Urban VIII commissioned Pietro Bernini in 1623 to build the fountain as part of a prior Papal project to erect a fountain in every major piazza in Rome. The fountain was completed between 1627 and 1629 by Pietro possibly along with the help of his son Gian Lorenzo Bernini, especially after his father's death on August 29, 1629.

The sculptural fountain is made into the shape of a half-sunken ship with water overflowing its sides into a small basin. The source of the water comes from the Acqua Vergine, an aqueduct from 19 BCE. Bernini built this fountain to be slightly below street level due to the low water pressure from the aqueduct. Water flows from seven points of fountain: the center baluster; two inside the boat from sun-shaped human faces; and four outside the boat.

According to legend, as the River Tiber flooded in 1598, water carried a small boat into the Piazza di Spagna. When the water receded, a boat was deposited in the center of the square, and it was this event that inspired Bernini's creation. The fountain is decorated with the papal coat of arms of the Barberini family as a reminder of Pope Urban VIII's ancestry.