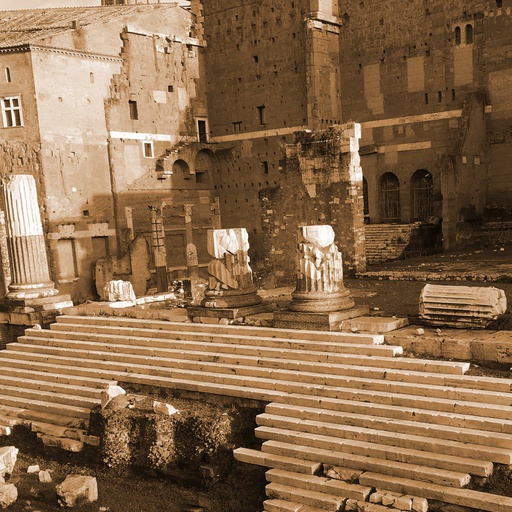 
At the center of the eastern side of the Forum of Augustus stood the Temple of Mars Ultor (from the Latin Ultor = Avenger). Its construction is due to Octavian Augustus, who had vowed to dedicate a sanctuary to Mars on the eve of the battle of Philippi, fought in 42 BC. together with Marco Antonio against Brutus and Cassius to avenge the killing of Julius Caesar, his uncle and adoptive father. The Temple was inaugurated in 2 BC.

From ancient sculptures we know the appearance of the pediment. In the center were the statues of Mars and Venus, believed to be the progenitors of the Romans and of the Gens Iulia, the family of Caesar and Octavian Augustus. On either side of the divine couple were the personifications of Fortune, the Goddess Rome, the Palatine Hill, the Tiber and the statue of Romulus, the mythical founder of the city in 753 BC. and its first king.

The temple was completely demolished, except for the three external columns still standing and the base, to recover marble and other building materials already at the time of the reign of the Ostrogothic king Theodoric (493-526). Between the 9th and 10th centuries the very first nucleus of the monastery of San Basilio settled on the base, which grew over time and then passed between the 12th and 13th centuries to the Knights of San Giovanni of Jerusalem (later called of Rhodes, today of Malta).

In 1566 the complex was donated by Pope Pius V (1566-1572) to a group of Dominican nuns: a new monastery and a new church were built, which occupied the area of ​​the Temple of Mars and which was dedicated to the Virgin of the Annunciation. Most of these structures were demolished between 1924 and 1932 to free the monumental remains of the Roman era. Many marble fragments found at the time are visible at the Museum of the Imperial Forums.