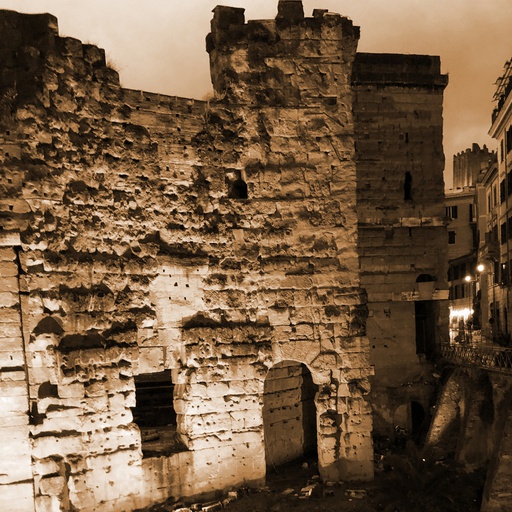 
The Forum of Augustus (Latin: Forum Augustum; Italian) is one of the Imperial fora of Rome, Italy, built by Augustus. It includes the Temple of Mars Ultor. The incomplete forum and its temple were inaugurated in 2 BC, 40 years after they were first vowed.

The triumvir Octavian vowed to build a temple honoring Mars, the Roman God of War, during the battle of Philippi in 42 BC. After winning the battle, with the help of Mark Antony and Lepidus, Octavian had avenged the assassination of his adoptive father Julius Caesar. He became the Princeps of Rome in 27 BC under the name Augustus, and planned for the temple to be built in a new forum named after himself. Augustus used social propaganda by continuing Julius Caesar's will to create a Temple to Mars Ultor "greater than any in existence," by placing it within the Temple, linking himself to his divine adopted father, obtaining a strong link to the Roman population through their love for the deceased dictator.

The majority of the land that the Forum was to be built on was already owned by Augustus himself. However, the initial plans called for more space than he had and would have required him to purchase or expropriate further land. Instead, the plans were altered slightly, so some asymmetry is apparent, especially in the Eastern corner of the precinct. Suetonius states that Augustus did not want to take the houses of the nearby owners by force. These land issues, as well as numerous architectural mishaps, prolonged construction. The incomplete forum and its temple were inaugurated, 40 years after they were first vowed, in 2 BC. In 19 AD Tiberius added two triumphal arches either side of the temple in honour of Drusus the Younger and Germanicus and their victories in Germania.

With the dedication of the Forum of Trajan in 112, the number of inscriptions found in the Forum of Augustus decline, which suggests that many of its functions were transferred to the new venue, although Hadrian made some repairs. The educational and cultural use of the exedrae were recorded in the late antiquity. The last reference to the forum dates to 395. Archaeological data indicates that the structures were systematically dismantled in the first half of the 6th century, probably because it was seriously damaged in an earthquake or during the wars. The Forum of Augustus was among the first of the great public buildings of Rome which disappeared that also explains the rapid loss of the memory of its original name. In the 9th century a Basilian monastery was erected on the podium of the ruined temple. By the 10th century, the forum had become so congested with ruins and vegetation, that the locals had given it the name Hortus mirabilis (the wonderful garden).