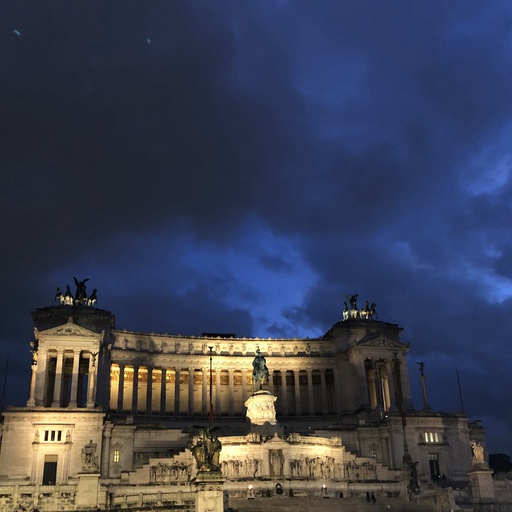 
The Victor Emmanuel II National Monument (Italian: Monumento Nazionale a Vittorio Emanuele II), also known as the Mole del Vittoriano or simply Vittoriano, is a large national monument built between 1885 and 1935 to honour Victor Emmanuel II, the first king of a unified Italy, in Rome, Italy. It occupies a site between the Piazza Venezia and the Capitoline Hill.

It is currently managed by the Polo Museale del Lazio and is owned by the Ministry of Cultural Heritage and Activities.

From an architectural perspective, it was conceived as a modern forum, an agora on three levels connected by stairways and dominated by a portico characterized by a colonnade. The complex process of national unity and liberation from foreign domination carried out by King Victor Emmanuel II of Savoy, to whom the monument is dedicated, has a great symbolic and representative value, being architecturally and artistically centred on the Italian unification—for this reason the Vittoriano is considered one of the national symbols of Italy.

It also preserves the Altar of the Fatherland (Italian: Altare della Patria), first an altar of the goddess Rome, then also a shrine of the Italian Unknown Soldier, thus adopting the function of a lay temple consecrated to Italy. Because of its great representative value, the entire Vittoriano is often called the Altare della Patria, although the latter constitutes only a part of the monument.

Standing in the centre of ancient Rome, and connected to the modern one by the streets that radiate from Piazza Venezia, it has been consecrated to a wide symbolic value representing a lay temple metaphorically dedicated to a free and united Italy—celebrating by virtue the burial of the Unknown Soldier (the sacrifice for the homeland and for the connected ideals).