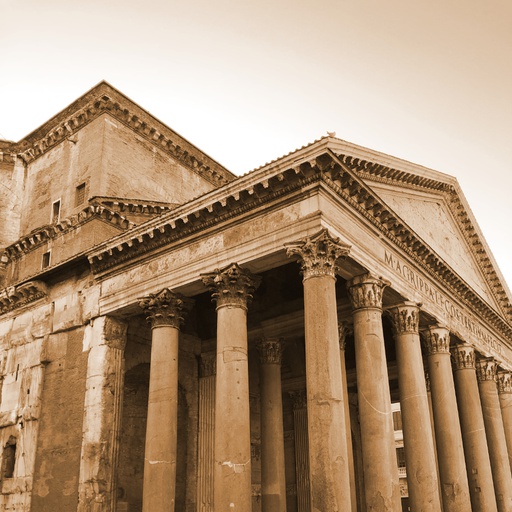 
The Pantheon (UK: /ˈpænθiən/, US: /-ɒn/; Latin: Pantheum, from Greek Πάνθειον Pantheion,
"[temple] of all the gods") is a former Roman temple and since 609 AD,
a Catholic church (Basilica di Santa Maria ad Martyres or Basilica of St. Mary and the Martyrs),
in Rome, Italy, on the site of an earlier temple commissioned by Marcus Agrippa during the
reign of Augustus (27 BC – 14 AD). It was rebuilt by the emperor Hadrian and probably
dedicated c. 126 AD. Its date of construction is uncertain, because Hadrian chose not to
inscribe the new temple but rather to retain the inscription of Agrippa's older temple,
which had burned down.

The building is cylindrical with a portico of large granite Corinthian columns (eight in the
first rank and two groups of four behind) under a pediment. A rectangular vestibule links the
porch to the rotunda, which is under a coffered concrete dome, with a central opening (oculus)
to the sky. Almost two thousand years after it was built, the Pantheon's dome is still the
world's largest unreinforced concrete dome. The height to the oculus and the diameter
of the interior circle are the same, 43 metres (142 ft).

It is one of the best-preserved of all Ancient Roman buildings, in large part because it has
been in continuous use throughout its history: since the 7th century, it has been a church
dedicated to St. Mary and the Martyrs (Latin: Sancta Maria ad Martyres) but informally known
as "Santa Maria Rotonda".[5] The square in front of the Pantheon is called Piazza della Rotonda.
The Pantheon is a state property, managed by Italy's Ministry of Cultural Heritage and Activities
and Tourism through the Polo Museale del Lazio. In 2013, it was visited by over 6 million people.

The Pantheon's large circular domed cella, with a conventional temple portico front, was unique
in Roman architecture. Nevertheless, it became a standard exemplar when classical styles were
revived, and has been copied many times by later architects.