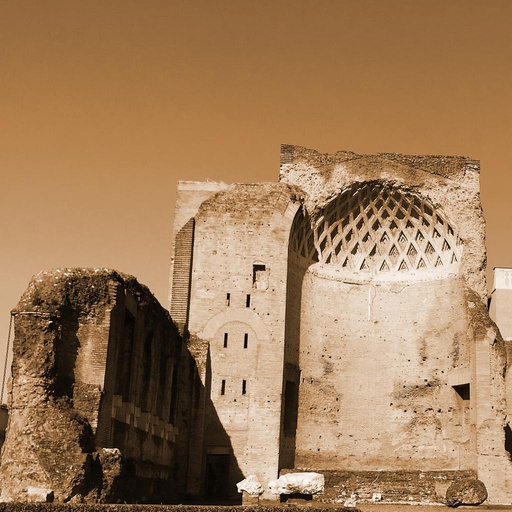 Temple of Venus and Roma


On a high base overlooking the Colosseum Valley stands the temple that Hadrian wanted to dedicate to the goddess Roma Aeterna and the goddess Venus Felix. It is the largest sacred building built by the Romans, and one of the largest in antiquity.

The temple was built from 121 AD according to a design by the emperor himself, who, as the Historia Augusta(Hist. Aug. Hadr., 19.12) tells us, first had to remove the famous Neronian Colossus from the area, for which he employed 24 elephants, moving the statue to the position where it is still remembered today near the Flavian Amphitheatre.

The emperor inaugurated the building in 136 or 137 AD on his return from Judea, but it was completed by Antoninus Pius in 141 AD.

The plan of the building is characterised by two cells oriented in opposite directions and preceded by a vestibule. From the cell facing the Colosseum, dedicated to Venus, only the apse remains, while in the opposite cell, dedicated to Roma, an oratory was already built in the 8th century in honour of Saints Peter and Paul, later transformed into the church of Santa Maria Nova, and from the 15th century into Santa Francesca Romana.

In addition to its extraordinary dimensions (over 100 m x 50 m of surface area and about 30 m in height), the monument was characterised by an entirely original design, according to the eclectic style typical of Hadrianic architecture, which combined Hellenistic proportions and spatiality with Roman urban planning and construction techniques. There must have been over two hundred columns in the temple, including the Proconnesian marble columns of the porticoes and the grey granite columns of the peristyle.

What remains of the temple today is the result of restoration work carried out by Maxentius after the disastrous fire of 307 AD. He made some changes to the structure, such as the insertion of porphyry columns and the creation of two apses with vaulted roofs and coffered decoration.
The ceiling coffers were decorated with stuccoes, which, as recent restorations have shown, were at least partly covered with gold leaf, while the walls were adorned with multicoloured incrustations made of alabaster, cipollino and serpentine.

Both the anastylosis of the porphyry columns and the restoration of the marble floor were carried out between 1932 and 1935 under the direction of Alfonso Bartoli. The pavement of the cella of Roma is one of the most important examples of opus sectile with large modules that adorned public buildings and places of worship of the Urbe, and the restoration work carried out during the Fascist period recomposed the precious decorations in pavonazzetto marble and red porphyry according to the taste and knowledge of the time. The missing parts were integrated with pieces of the same ancient lithotypes and the gaps were reconstructed to restore the overall view of the pavement.

Between September 2020 and July 2021 the temple underwent further restoration works, carried out by the Parco archeologico del Colosseo with a technical sponsorship of the Maison Fendi, thanks to which the iconic monument is now fully accessible to the public again.