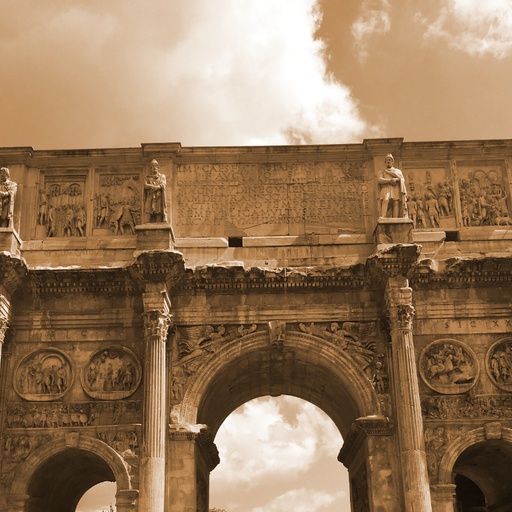 
The Arch of Constantine, built on the route followed by the triumphal processions, in the stretch between the Circus Maximus and the Arch of Titus, is the largest honorary arch that has come down to us. It is a synthesis of Constantine’s ideological propaganda. The arch celebrates the triumph of the emperor Constantine over Maxentius on October 28, 312 AD following the battle at the Milvian Bridge. The inscription on the central vault tells us that the monument was solemnly dedicated by the Senate to the emperor in memory of that triumph and on the occasion of the empire’s decennalia, at the start of the tenth year of his reign, on July 25, 315 AD.

The decoration in relief on slabs of marble was conceived and realised in the Constantinian period to a unified project, mostly using materials plundered from other imperial monuments. On the principal fronts of the arch and at the sides, reliefs from the age of Trajan, Hadrian, Marcus Aurelius and finally, in the lower sector, of Constantine are arranged in symmetrical patterns.

All the faces of the emperors that appear in the reliefs have been recarved in the likeness of Constantine, with the nimbus to connote the imperial majesty.

The many images that populate the arch are united by a single thread running through them: the celebration of the political design of restoration of the empire desired by Constantine. He wished to be celebrated and recognised as the new arbiter of the fate of Rome and as legitimately triumphant over his rival Maxentius. To do this, he chose a traditional monument rooted in imperial history: the triumphal arch. The structure was designed to narrate his victories, but was decorated with earlier sculptures from other buildings, so that the images of the past with the narrative of the wars and triumphs of the great protagonists of the empire would legitimise the power of Constantine himself. It was seen as a guarantee of the solidity of his government and support for his policies.