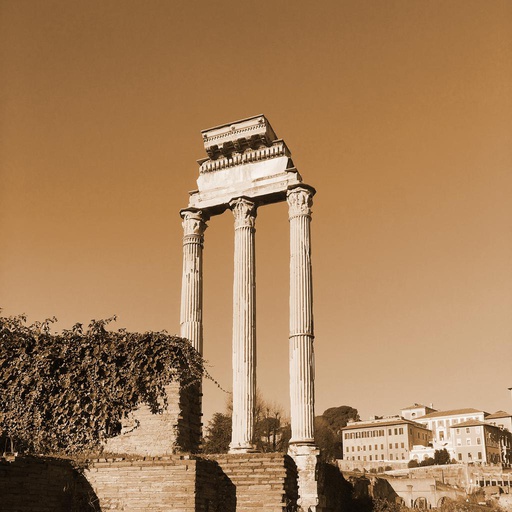 The Temple of Castor and Pollux


The Temple of Castor and Pollux was built in the southeast part of the Roman Forum, at the foot of the Palatine Hill, between the Spring of Juturna and the Vicus Tuscus. It celebrates an important victory of the Republic of Rome and the divine twins who are credited with the victory. At the battle of the Lake Regillus (499 or 496 BC), Aulus Postumius Albus, commander and Roman dictator, defeated the Latins who had been joined by Tarquin the Proud after the latter had been chased out of Rome. The battle was decisive in defending the young Roman Republic against any attempt to restore the monarchy. According to Livy, Postumius promised to dedicate a temple to Castor and Pollux if he won. Dionysius of Halicarnassus writes that two young horsemen of extraordinary beauty and stature led the Roman cavalry and routed the enemy. Later the same day they appeared in the Roman Forum, watering their horses at the Spring of Juturna near the Temple of Vesta. They brought news of the Roman victory. The triumph of Castor and Pollux in the battle is as important as their announcement of victory, making them simultaneously saviours and heralds. In the specific case, they also represent the contribution of the Roman cavalry to the outcome of the conflict. With the foundation of the temple the Romans "celebrated the aristocracy and its role in protecting the young Republic" (A. Carandini). Inaugurated in 484 BC by Postumius's son next to the site of the apparition, the Temple of Castor and Pollux is one of the oldest buildings in the Forum. It was increasingly central in public life, used not only for worship, and underwent various changes and transformations of meaning in the course of time. Its political role increased in the republican period, together with changes in the topography of the Forum and gradual transfer of functions from the Comitium. The Temple became a "pole of the new civic structure, based in the eastern sector of the Forum" (F. Coarelli). It was the site of Senate meetings, public debates, assemblies and public consultations. It was the destination of the annual cavalry parade (transeuctio equitum). It hosted various activities in the open part of the podium: shops, money deposits, the office of weights and measures. It also became an arsenal and refuge for Clodius during the tumult of the late Republic. Uses, meaning and importance of the temple explain the transformations made in the course of time to the original structure. Initially a massive building with a deep portico formed by four columns and a three-room cella, in the second century its portico was reduced due to construction of a tribune that could be reached by the lateral steps, and the facade, which then presumably had six columns, was also modified. In 116 BC, Lucius Caecilius Metellus Dalmaticus used profits from the Roman-Dalmatae wars to rebuild the temple on an even larger scale: a high podium, a larger tribune, eight columns on the facade, a single square cella, continuous colonnades along the sides, but probably not on the posterior wall. What remains today of the Temple of Castor and Pollux belongs mainly to the modifications of the imperial period, although traces of previous intervention can be recognised in the podium. The three Corinthian columns holding a fragment of architrave belong to the period of Augustus. The future emperor Tiberius, designated heir to Augustus, rebuilt the temple, probably after the fire in the Forum in 14 BC. The building resumed it Metellian structure, although it is decisively prostyle and built with more valuable materials and ornamentation. Inaugurated in 6 BC, Tiberius dedicated it to himself and to his deceased brother Drusus. The new dedication is a sign of new times. The myth of Castor and Pollux is used to represent fraternal devotion and Tiberius's duty towards Drusus. The harmony of the twins protects the transition of power between dynasties and their particular form of divinity extends to the imperial family, which is why Tiberius claimed a monument that had played a major political function in the late republic but was also a founding myth that united it with the great military victories of early republican history. Again Augustus and his successors exploit the symbolic meaning evoked by a monument of the republican period to establish and consolidate a new form of government. According to ancient literary sources, Caligula subsequently decided to link the temple with his palace on the Palatine Hill, making it into the vestibule of his house, which thus came under the protection of Castor and Pollux. The current remains of the front steps, which date back to the late imperial period, indicate that the tribune was replaced with a wide frontal staircase, introducing another moment in the long history of this building. Sources Filippo Coarelli, Il Foro Romano Periodo repubblicano e augusteo, Roma, 1985, vol. II, p. 199. Andrea Carandini (a cura di), Atlante di Roma antica, Milano, 2012, vol. I, p. 157.