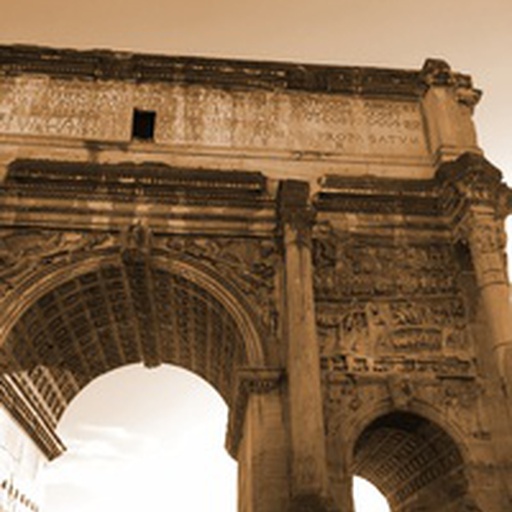 The Arch of Septimius Severus


The Arch of Septimius Severus was erected in 203 AD in the northwest part of the Forum Romanum, next to the Rostra Augusti and near the Curia Julia. Built in front of the Temple of Concord, of which it hides part of the facade, it redefines the short side of the Forum, to which it marks a new monumental entrance. The Arch is also a feature on the Sacra Via, which it spans at an important point on the route of triumphal processions to the Temple of Jupiter on the Capitoline Hill, a node between the Sacra Via and the Clivus Capitolinus. There have been different interpretations regarding the position of the Arch, or the relation between the Arch, the road level and the level of the Forum square with its various paving. The scenographic effect of this side of the square was probably increased by the five honorary columns on the tribune of the Rostra Augusti, built about the same time. The Arch defines new relations with its context. It links up with a colossal equestrian statue of Septimius Severus in bronze, probably erected where the equestrian statue of Domitian previously stood, in the centre of the Forum. It presumably contrasts with the closer and more modest Arch of Tiberius, and with arches believed to stand beside the Temple of Caesar on the opposite side of the Forum, especially with the similar but smaller and less monumental Arch of Augustus. The monumental nature and rich decoration of the Arch of Septimius intentionally distinguish it from the formal simplicity of the Curia, the house of the Senate. The Arch of Septimius Severus manifests ambition for presence in the Forum, also expressed by other work of different kinds, such as restoration of the Temple of Vespasian and the Temple of Concord and reconstruction of the Temple of Vesta. The relationship with this space and its Severan monuments (the dynasty beginning with Septimius) is different from that of the adoptive Antonine emperors. It expresses a search for continuity and wholeness, a need for legitimation of power and affirmation. The arch, a celebrative monument par excellence, is designed to exalt the deeds of the new emperor and the solid presence of his stock through its monumental structure and exceptional position. Septimius Severus came from the Roman province of Africa. He was born at Leptis Magna (not far from contemporary Tripoli) to an equestrian family. He governed the province of Pannonia Superior at the time of the death of Commodus, the last representative of the Antonines. The ensuing conflict for succession between emperors nominated by the Praetorians and those acclaimed by the legions led finally to his acceptance by the Senate. He entered Rome unarmed, dressed in a toga, but progressively eliminated his rivals. He proclaimed himself adoptive son of Marcus Aurelius and immediately set about restoring the principle of dynastic continuity. Not by chance, the arch is dedicated by the Senate to Septimius Severus and his two sons, Caracalla and Geta, though when the latter is killed by his brother, his name is removed from the epigraph of the Arch. Coins of the period show that the Arch was crowned by a statue of the emperor and his sons in a triumphal chariot drawn by six horses. In the words of Pliny the Elder's Naturalis Historia, the Arch raised the figures "above other mortals", in this case on a structure almost 23 metres high. The bass reliefs on the main facades, alternating with three vaults and four free columns on high pedestals, tell of the military campaign and victory over the Parthians that led to the creation of new provinces, such as Mesopotamia. As shown by traces of the bronze lettering that once composed the dense dedication, the Arch celebrates "restoration of the state and expansion of the empire of the Roman people". In this staging of power, the theme of triumph unites with that of continuity of the empire and the dynasty, although the phase of Roman history begun by Septimius Severus involves a change in the roles and balance between senatorial aristocracy, soldiers and provinces of the empire, with the dominus prevailing over the princeps.